Lying close to the coast of Eastern Macedonia, Thasos was inhabited from the Palaeolithic period onwards, but the earliest settlement to have been explored in detail is that at Limenaria, where remains from the Middle and Late Neolithic relate closely to those found at the mainland's Drama plain. In contrast, Early Bronze Age remains on the island align it with the Aegean culture of the Cyclades and Sporades, to the south at Skala Sotiros for example, a small settlement was encircled by a strongly built defensive wall.

Even earlier activity is demonstrated by the presence of large pieces of 'megalithic' anthropomorphic stelai built into these walls, which, so far, have no parallels in the Aegean area. There is then a gap in the archaeological record until the end of the Bronze Age c 1100 BC, when the first burials took place at the large cemetery of Kastri in the interior of the island. Here built tombs covered with small mound of earth were typical until the end of the Iron Age. In the earliest tombs were a small number of locally imitated Mycenaean pottery vessels, but the majority of the hand-made pottery with incised decoration reflects connections eastwards with Thrace and beyond. 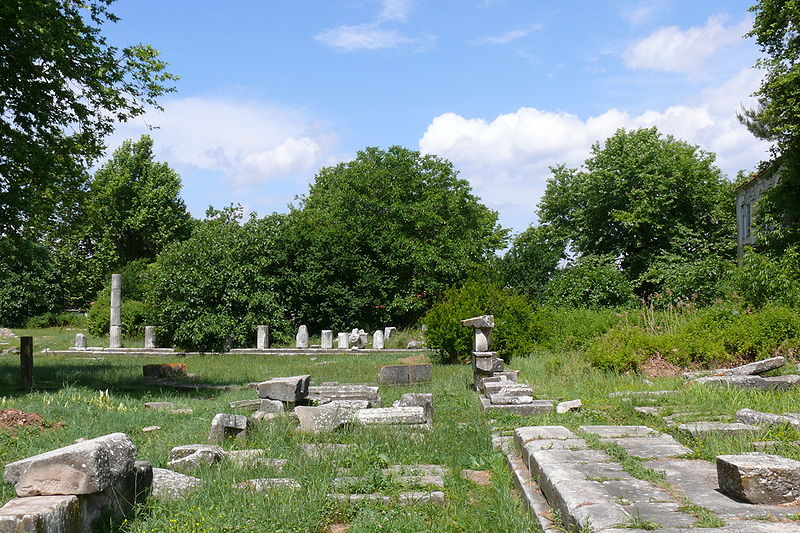 The island was colonized at an early date by Phoenicians, attracted probably by its gold mines; they founded a temple to the god Melqart , whom the Greeks identified as "Tyrian Heracles", and whose cult was merged with Heracles in the course of the island's Hellenization. The temple still existed in the time of Herodotus. An eponymous Thasos, son of Phoenix (or of Agenor, as Pausanias reported) was said to have been the leader of the Phoenicians, and to have given his name to the island. Around 650 BC, or a little earlier, Greeks from Paros founded a colony on Thasos. A generation or so later, the poet Archilochus, a descendant of these colonists, wrote of casting away his shield during a minor war against an indigenous Thracian tribe, the Saians.

Thasian power, and sources of its wealth, extended to the mainland, where the Thasians owned gold mines even more valuable than those of the island; their combined annual revenues amounted to between 200 and 300 talents. Herodotus says that the best mines on the island were those opened by the Phoenicians on the east side of the island, facing Samothrace.. Archilochus described Thasos as "an ass's backbone crowned with wild wood." The island's capital, Thasos, had two harbors. Besides its gold mines, the wine, nuts and marble of Thasos were well known in antiquity. Thasian wine was quite famous. Thasian coins had the head of the wine god Dionysus on one side and bunches of grape of the other.

Thasos was important during the Ionian Revolt against Persia. After the capture of Miletus (494 BC) Histiaeus, the Ionian leader, laid siege. The attack failed, but, warned by the danger, the Thasians employed their revenues to build warships and strengthen their fortifications. This excited the suspicions of the Persians, and Darius compelled them to surrender their ships and pull down their walls. After the defeat of Xerxes the Thasians joined the Delian confederacy; but afterwards, on account of a difference about the mines and marts on the mainland, they revolted.

The Athenians defeated them by sea, and, after a siege that lasted more than two years, took the capital, Thasos, probably in 463 BC, and compelled the Thasians to destroy their walls, surrender their ships, pay an indemnity and an annual contribution (in 449 BC this was 21 talents, from 445 BC about 30 talents), and resign their possessions on the mainland. In 411 BC, at the time of the oligarchical revolution at Athens, Thasos again revolted from Athens and received a Lacedaemonian governor; but in 407 BC the partisans of Lacedaemon were expelled, and the Athenians under Thrasybulus were admitted.

After the Battle of Aegospotami (405 BC), Thasos again fell into the hands of the Lacedaemonians under Lysander who formed a decarchy there; but the Athenians must have recovered it, for it formed one of the subjects of dispute between them and Philip II of Macedonia. In the embroilment between Philip V of Macedonia and the Romans, Thasos submitted to Philip, but received its freedom at the hands of the Romans after the Battle of Cynoscephalae (197 BC), and it was still a "free" state in the time of Pliny.